Until the early 1840's, settlement on the south side of Kemptville had stopped at Asa Street. The river remained the main focus of the village, both for trade and com- munication. The road south to Prescott entered into thick bush around Asa Street, so thick even those on horseback would sometimes have to dismount and walk. After the fire of 1872 had destroyed Prescott Street from Water to Asa Streets, most of the rebuilt properties there were dedicated to business and commercial operations. Business owners and other leading members of Kemptville society, began to build residences closer to the commercial centre, and many of them moved from the Clothier West area on to large lots and into newer homes. The churches and schools followed. This tour takes in some of those residences, and the commercial concerns that grew up around the Prescott Street district. 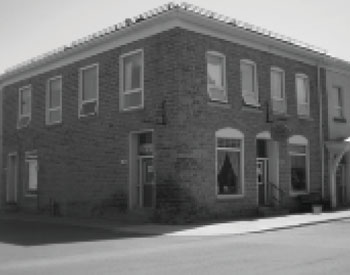 This house has been a residence and business centre ever since Harold Hutchins built here in the 1860's. Angus Buchanan lived here and ran his drug store between 1880 and 1901, when he died. Buchanan was Reeve of Kemptville for a total of seven years, and ran for the Provincial Assembly, unsuccessfully, twice and for the Canadian Parliament once. His wife carried on the business until 1919, when Dr. R. A. Patterson’s dentist office took over the second floor, remaining there until 1972. The ground floor continued in use as a drug store under different owners. Patterson added the addition to the south of the original building, and it was known as the Patterson Block. 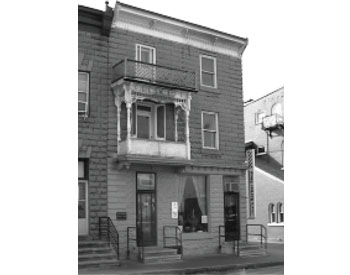 George Tuck had this building constructed in 1902 as a location for his barber shop. It was a custom-designed shop, complete with hot air, hot and cold water, and baths. His assistant was Reuben Clothier and Tuck and his wife maintained the building until 1946, when it was sold to another barber, Hugh Hyndman. It remained a barber shop under Art Shaver (appropriately) and others until 1968, when it became a real estate office owned by the Swedlove family. Since then, it has been the location of Bytown Electrical Services and Eagle Tax Service. It is one of the more attractive buildings on Prescott Street, with an unusual frontage giving it real character. 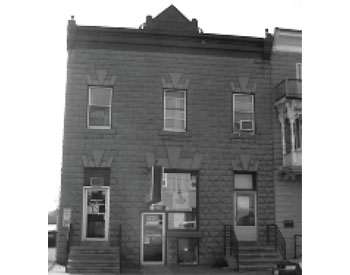 Until around 1900, these lots on the west side of the street were part of the Anderson & Langstaff company property. In 1910, the company built the Advance Building to accommodate the local newspaper’s offices, whose previous location on Clothier Street had been badly damaged by fire in 1909. The newspaper rented the building until 1924, when it was bought by the proprietor, John Colborne. Ownership changed hands with the newspaper over the years. Between 1941 and 1950, it was also the location of the Oxford-on-Rideau Egg Association. The upper floor was used by the local Masons for years as a meeting place and the newspaper shared space with various offices. The newspaper has since moved to other offices on Prescott Street. The building was still owned by Advance Printing Ltd., providing office supplies and printing services. 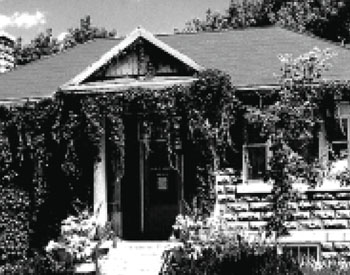 In 1911, the Public Library was located in the Fraser Building, north of the river. In that year, the Carnegie Foundation provided a grant of $3,000 on condition that the community provide the site and the corporation provide 10% of the amount annually. The land was bought from Angus Buchanan’s widow, Mary Ann, for $500. The building was erected in 1912, designed by A. Stuart Allister. The Library is constructed of rock-faced concrete block with red mortar. It was designated under the Ontario Heritage act in 2001. It is scheduled to cease operations as a Public Library once the new central Library opens. 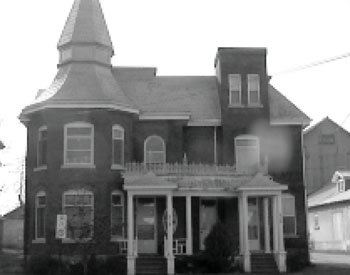 The land on which these two homes are built was once part of an extensive property owned by the Blackburn family. In the 1880's Jane Archibald ran a boarding house here. Dr. Charles Ferguson and his wife lived here from 1891 until 1897 before moving to the stone house at the corner of Clothier and Rideau. Dr. G. E. Hanna bought the property in 1897 and built the house at 216-218 Prescott street. In the same year he divided the property and sold the south half to William H. Anderson, who built the brick house at 220 Prescott Street. When Dr. Hanna died in 1910, his house was sold to Thomas A. Craig, and it stayed in his family until 1943. Craig was a School Inspector, and Dr. R. A. Pratt had his offices on the north side of this building from 1910 until the 1950's. Anderson’s daughter sold their home in 1939 to Urias DePencier, and it remained in that family until 2008. [Picture: the Craig house.

The educational needs of local children were an increasing burden through the early years of Kemptville’s existence. From one-room school-houses around the area, to a central Public School built in 1873, attendance increased and demands on space grew likewise. In 1888 a new High School was built on this site to meet this need. In a very short time, the four teachers hired for the school were unable to cope with the enrollment as the school attracted students from as far away as Dundas and Car- leton Counties. In January of 1936, a suspicious fire broke out in the empty school and it was completely destroyed in the blaze. A fire fighter lost his life fighting the blaze. Even more suspiciously, the Public School also burned down just a couple of months later. The present building was designed by Frederick Wilson Warren and opened in December, 1936. It has been enlarged and renovated a number of times since. It is due to be replaced in the near future. 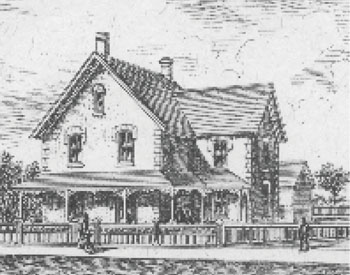 In 1866, the Methodist congregation decided to move from their location on Clothier Street to a new building on land they had bought in 1859 on Prescott Street. In 1869, this brick building was erected by Erastus Fenton. The Methodists were at the forefront of the Temperance movement in Canada, and feelings were running high in 1888 as anti-prohibition rallies were held across Ontario. An opponent of the Methodists set a fire in the basement of the church in January, 1888 destroying it. The church was rebuilt, and fully renovated again in 1898. The parsonage was erected on land purchased across the street at 401 Prescott Street in 1876, and extra land was bought to enlarge the property in 1879. The land was held by the church until it was sold in 1933. The illustration of the manse is from 1878. 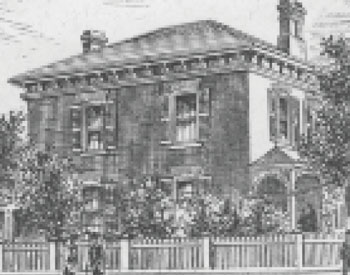 Thomas Blackburn bought this property in 1869 and built a residence on the corner. It was bought by T.A. Robinson in 1926. Robinson lived here and also ran an insurance business from here. In 1950, James Kennedy moved his hardware store into the building. He had been located in the Finnerty Block on the north side of town since 1947, but the business has remained in this location since 1950. In 1966, Kennedy sold the store to the Hamilton family, who have run it as the Home Hardware Store since. 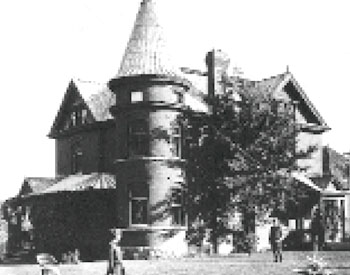 Robert Jackson was born near Heckston, but went to California where he made his fortune. In 1901 he bought 9 acres of land from the Rath family who had bought it from the Clothiers in 1839. Jackson built the present building and developed a farm, orchard and gardens around it. In 1907 Jackson sold the property to G. Howard Ferguson, who had been Reeve of Kemptville from 1900-1902. He was elected to the Ontario Legislature in 1905 and became Premier of the province in 1923. He served until 1930, then went as Canadian High Commissioner to London until 1935. During that entire period, this was his home. He sold the property in 1939, and, after 1958, the land was sub-divided and developed. But the house remains, a reminder of Kemptville’s Premier. The picture shows Ferguson and his wife in the gardens. 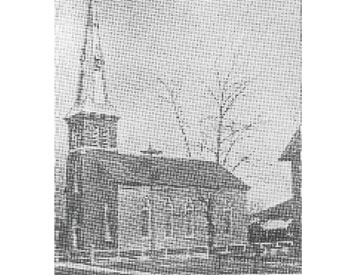 Before 1850, the Presbyterians of the region had places of worship in South Gower and on a farm just east of Oxford Mills. However, as Kemptville grew in size and importance, it was decided to erect a church there and land was bought in 1849 by the trustees of the congregation at this location. Money was raised from as far away as the United States, and the building that opened in 1851 was quite simple and unfurnished, using planks resting on boxes for seats. Gradually, the building was improved, and in 1895 the spire and interior furnishings were added. In 1873, the lots behind the church, on Mary Street, were purchased and a parsonage was built. This home served as the parsonage until it was sold by the congregation in 1947 to Albert Johnston. The house remained in the Johnston family for forty years afterwards. 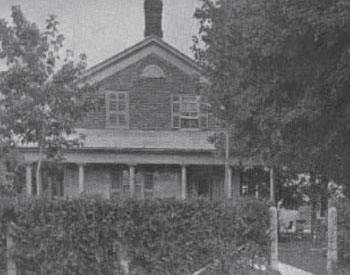 Thomas Maley bought this block of land, 6.5 acres, from Asa Clothier in 1848. The house at 305 Thomas Street was, until 1892, the only home on this parcel of land. It was surrounded by gardens and hedges, and was a centre for social gatherings. Maley was a private banker and a member of the first Council of Kemptville in 1857. After his death in 1890, the block began to be subdivided as the area became popular with the wealthier segment of the community. As lots were sold off, there were restrictions on where new homes could be built, to preserve the privacy of the Maley home. Over the years, many of the leading citizens of Kemptville built homes on this property, including G. Howard Ferguson, Angus Buchanan, Alonzo Wright and John Selleck. The Maley house is now surrounded by a densely packed residential neighbourhood, but when the photograph above was taken, it was described as “a quaint old cottage”. 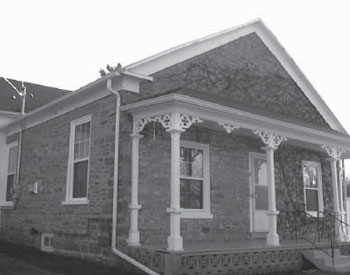 This building was built to use as a school in 1847, on land then owned by Emily & Frederick Moore. The first teacher was John Conn, who had previously started the school on Clothier Street. The school was run by a Board of Trustees until 1873, when a new Board of Education was formed to supervise both public and grammar schools in the village. The school here was closed that year when the new Public School was built where the B&H supermarket is today. The house has been a private residence ever since. In 1950, it was bought by William J. Kilfoyle, who, appropriately, served on the Board of Education from 1943. It has remained in the Kilfoyle family until today. 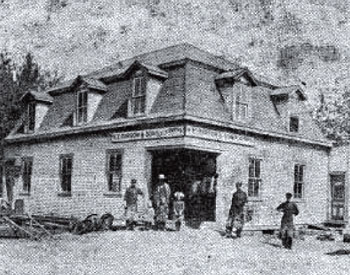 This was the northwest corner of the Maley Lot until 1893, when it was bought by Zachariah Leach, who opened a blacksmith shop here. Leach was a well-traveled man and a skilled smith and horseshoer, who built up a successful business and served on the Town Council. He was also a Justice of the Peace. In 1909, the business was bought by Henry Carson who carried on as blacksmith (see picture). John Dobson continued the business until 1938, as blacksmiths began to be less in demand, when Ernest McKendry opened a feed store on the site. From 1944, Kemptville Creameries used the building for storage. The building burned down and the site was cleared in the 1970's and has been used as a parking lot for the apartment building across the street since then. 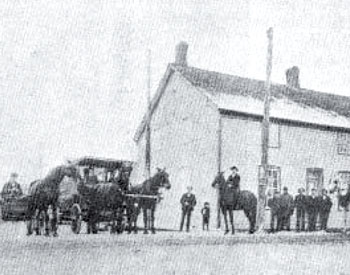 Chester Banks began a livery stable business here in 1878 and, with his sons, developed the business into renting out rigs for picnics and driving parties (see picture). The Banks brothers started a bus company, using horse-drawn carriages to transport passengers to and from the railway stations at Bedell and Kemptville, and servicing the hotels around the village. They also ran a drayage service from their livery stables, until the rise of the automobile changed the transport industry forever. In 1922, Kemptville Creameries was organised in response to Provincial legislation governing dairy products. The Creameries rented the site of the Banks stables in 1922, and bought the site outright in 1933. In addition to making butter, the company provided a frozen foods locker service and operated a meat shop on the site. After the Creameries closed, the site was redeveloped and the present apartment building was erected.